Would you like to switch to the accessible version of this site?

Don't need the accessible version of this site?

Summer is upon us once again. As I sit on the beach and look out over the ocean's surf, digging my toes into the sand, my mind begins to wander to an era gone by of bathing beauties, retro hairdos, and pinstriped suits. It is just then that I find myself looking forward to Galveston's favorite summer beach side event: the historic Galveston Island Beach Revue. 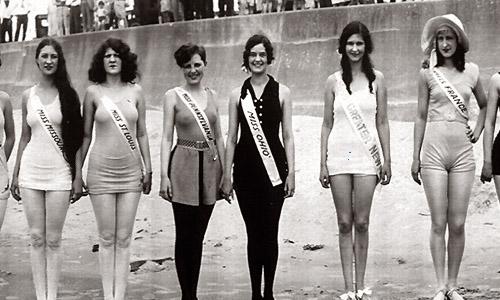 Dubbed the "International Pageant of Pulchritude and Annual Bathing Girl Revue" by C.E. Barfield, Galveston's Bathing Beauties Contest began in the summer of 1920. Each year from then on, this event marked the official kick-off for tourist season in Galveston. By 1928 the event, which had morphed into the "bathing girl revue", had become so popular that the Island's population tripled during the event weekend. These island pageants were the beginning of what is known today as the Miss Universe Pageant. The Galveston Bathing Beauties pageant ended in 1932, due in part to the Great Depression, but was resurrected in 2009 by Islander By Choice, LLC.

In the late 20's, a lesser remembered but equally crowd-inducing beauty pageant also gained the nation's attention, the Most Perfect Back contest.

In 1937, Marino Mario Mihovil, Sr", a Chiropractor in Galveston for fourteen years and board member of the Texas State Chiropractic Association, helped organize Galveston's "Most Perfect Back" contest. The contest was sponsored by the Galveston Beach Association and held in conjunction with the final session of the convention of the Texas Chiropractic Association. Twenty-seven attractive young women (ages 18 to 30) from all over the state competed for $300 and a silver trophy. Members of the state association served as judges while the entries appeared in backless formal evening costumes." (1 )  During the competition, the 27 competitors were scored on overall health, correct posture, body balance, skeletal structure, vitality, and muscular tone. Dr. M. M. Mihovil presided and introduced participants during the program. It is rumored that the "Most Perfect Back" contest drew 10,000 spectators to Galveston.

These chiropractic sponsored competitions gained so much notoriety that they were covered in national newspapers and attracted national participants/contestants. Paramount, Pathê, and Universal Studios even distributed a film that was showcased in movie theaters nationwide.

Among the Galveston contestants that year was local residen Ms. Florine Gonzales. As a friend of HealthMatters Chiropractic, her daughter Claudia, who still resides in Galveston, shared with us a beautiful photo of her mother during the competition that was held 75 years prior. Although her mother didn't win the competition, she cherishes the picture always.

"I just love the picture," Claudia says. "She is so vibrant and full of youth!"

Dr. M.M. Mihovil went on to become the president of the Texas State Chiropractic Association in 1939, and although he has long since passed away his grandson, R.J., has continued Dr. Mihovil's hobby of photography and is now a professional photographer in downtown Galveston. R.J. has many historical documents and photographs of the competition and from that time period, many taken by his grandfather himself.

Breathing new life into the historic Most Perfect Back competition of the 30's, HealthMatters Chiropractic and Islander By Choice, LLC have brought these two historical events together once again as a new competition category entitled the "Most Beautiful Back" contest.

Please watch for us in 2015 when we will once again be taken back in time to this fun and sun-filled period of Americana history.

Congratulations Most Beautiful Back Contest, in the Galvez Hotel and Spa's Galveston Island Beach Revue. We had a great contest this year, with 40 Beautiful Backs to judge on the three merits of Posture, Vitality, and Physique.

Find us on the map

Self Care for Chronic Pain: Do's and Do Not's

Wondering what to do about your chronic pain? These tips can help. ...

Working from Home and Chiropractic Care: How to Stay Healthy

The Benefits of Chiropractic Treatment for Older Patients

Could chiropractic treatment help you deal with the effects of aging? ...

Why Movement is Important for Healing Injuries

Do you want to get back to normal faster after an injury? Get moving! ...

What Are Neck Spasms and Why Do They Occur?

Are you wondering why you have painful neck spasms? ...

How to Strengthen Your Joints

Are you struggling with painful, weak joints? ...

Enjoy the Health Benefits of Massage Therapy and Chiropractic

Want to improve your health? Massage therapy and chiropractic treatment may offer the perfect solution. ...

Why an Inactive Lifestyle Isn’t Good For You

Do you exercise enough? You may be at risk of developing these health conditions if you lead a sedentary lifestyle. ...

What Chiropractic Care Can Do for Older Patients

Would you like to avoid aches and pains as you age? Chiropractic care can help. ...

Causes and Treatments of Muscle Spasms

Looking for a way to relieve your muscle spasms? A visit to the chiropractor could help. ...